No Clear Connection between British Citizenship and the Right to Vote

Posted on September 2, 2013 by right2vote4xpatbrits

The lack of a clear connection in law between British citizenship and the right to vote has permitted successive British governments to allow the following injustice:

According to the article below “Commonwealth citizens ‘should lose right to vote’ in The Times of 28th August, 2013 :

“In 2007, the government ordered a review of British citizenship laws by Lord Goldsmith QC, the then Attorney general, but did not act on his advice that it should make a ‘clear connection between citizenship and the right to vote'”.

Fight this injustice by ensuring via the Electoral Commission’s website www.aboutmyvote.co.uk  that you are still registered to vote in UK elections or, if you have lived abroad for more than 15 years, we’d appreciate you adding your vote here in our on-line poll to remove this time limit on our voting rights. 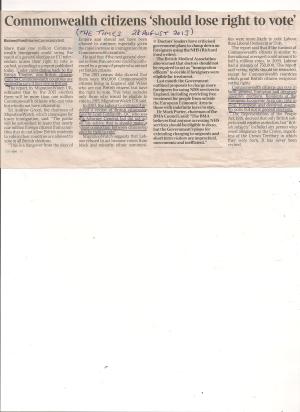